Qualifications and Degrees: A Simplified Outline 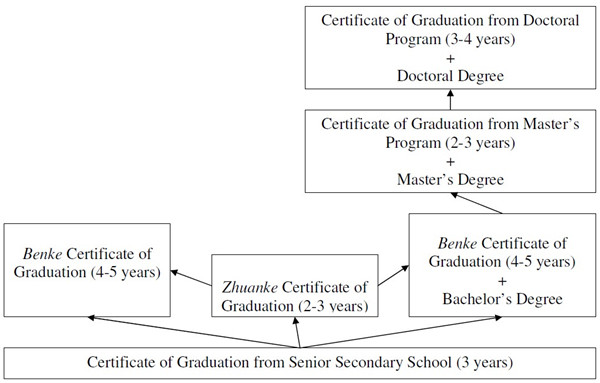 2. The presentation aims to clarify the interrelationship of qualifications and degrees and identify the various possible paths a student can take in the Chinese higher education system. This knowledge will help us better understand the academic background of Chinese students based on their credentials, especially if they have followed a somewhat “unconventional” path.

3. A Zhuanke Certificate of Graduation is often translated as a Diploma of a (2-year or 3-year) junior college course. 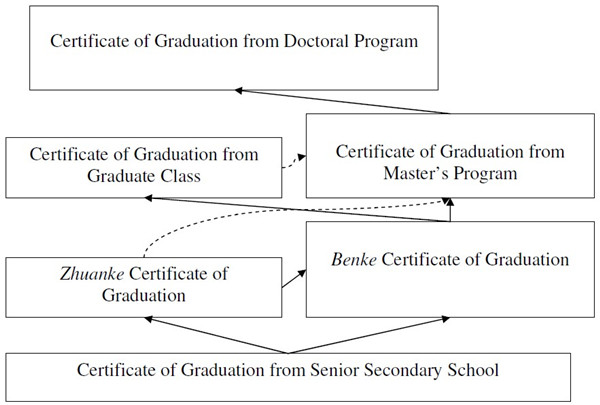 1. The Chinese term for educational qualifications (xueli,学历) literally means “educational experience”. It represents the completion of a recognized educational program of a defined level.

2. Qualifications are documented by (毕业证书/毕业文凭), usually translated as Certificate of Graduation.

3. Graduate Class is a graduate coursework program offered in the late 1980s and early 1990s.

5. A Certificate of Completion from a qualification program indicates deficiencies.

6. Certificates of Graduation are considered complete exit credentials and give access to both employment and further education. Employers traditionally require qualifications rather than degrees, especially at the benke/bachelor level. Benke qualification is accepted on par with a bachelor’s degree for admission into master’s programs, but a master’s degree is required for admission into doctoral programs.

1. The Chinese term for academic degree (xuewei,学位) literally means “academic position/status”. It represents academic achievement of a defined level. Only the bachelor’s degree has to be based on a same-level qualification – no benke, no bachelor degree.

Master’s and doctoral degrees have always had separate certificates.

3. The dual-credential system was born at the introduction of academic degrees in China in 1981.

– It is possible, but unusual. A bachelor’s degree is not required for admission into master’s programs. However, graduate admission is highly competitive even for bachelor degree holders.

– It is possible, but very unusual. A zhuanke certificate holder with several years’ work experience can apply to a regular master’s program by claiming “comparable educational competence” and passing a few extra exams.

– It is possible, but very unusual. Only high-performing students can get into graduate programs, and few would graduate but fail to get their master’s degree due to poor grades.

– First, make sure the applicant really does not have the certificate of graduation.

– It might be a professional master’s degree – an accurate translation is needed to confirm this. Or it might be obtained through independent study and passing national master-level exams.

– The accompanying transcript would not indicate 2 or 2.5 years of full-time study as in a regular master’s program. For example, a master of education professional degree can be completed in as little as six months.